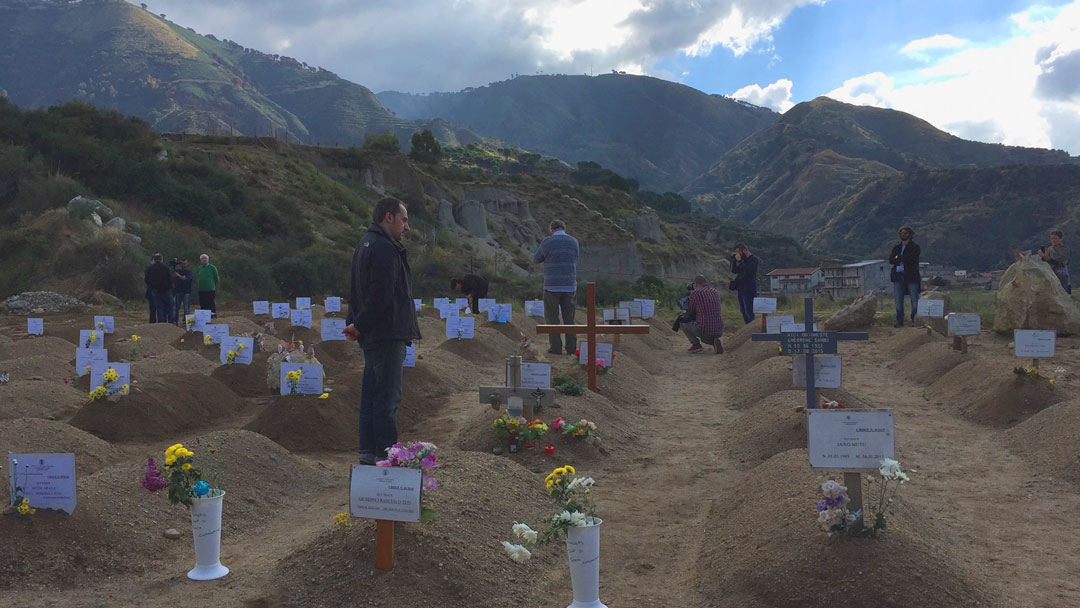 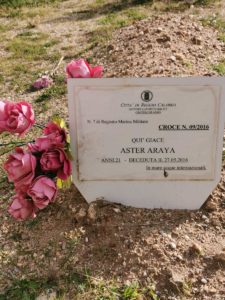 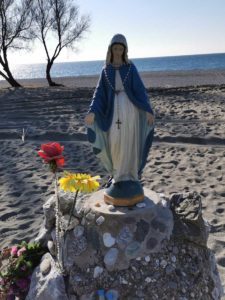 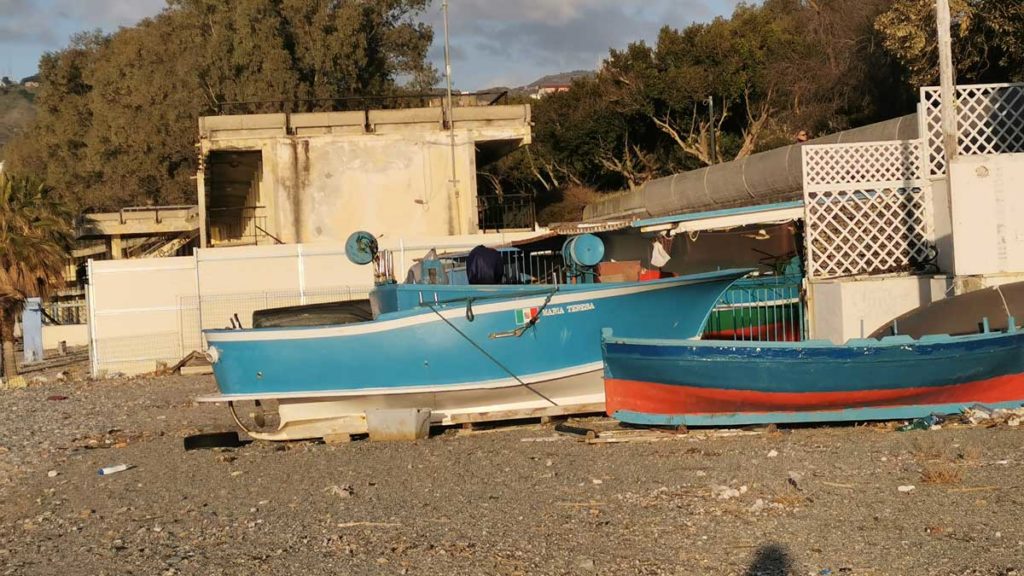 From Jan. 7-14, 2020, three women made a pilgrimage to Southern Italy: More precisely, the destination of their trip was the International Cemetery in Tarsia/Calabria, on which the internet only gave few informations. The politically right-wing orientation of the President at that time and some other reasons, which I will tell about in the second part, put the project on hold for the time being. As a Zen Peacemaker and coordinator of retreats and sesshins, I had already been to Lampedusa twice and in between also to Piraeus (not organized by me) to witness firsthand the lives of refugees. In the meantime, their deaths, which are usually more like a staggering, in high numbers, had become even more relevant. But above all, since the captain and human right’s activist Claudia Rackete was on everyone’s lips and in the media, thereby especially present in Lampedusa, I thought, this island is stocked with souls willing to rescue and support, with people who, like me, cannot or do not wish to look away. (Whereby, and this is important for me to emphasize, I see pilgrimages as basically joy-giving good opportunities to let compassion become effective. Yes, joy. I’ll come back to that later.)
So then we could go watching out for that graveyard haunting my mind for years, because my question “Where Do The Dead Actually Go?” who are showing up, already dead, on the shores and beaches of the islands, or who die while still imprisoned in the “hotspots” or who have been suddenly found by horrified fishermen in their nets, shouted for an answer.

This question had already moved me when I saw the photos in the news, in 2014, photos of halls filled with coffins close together, on which lay red roses. It was not possible to keep this up for long in Lampedusa, to give every single arrival a coffin, a grave. I am speaking now of a few impressions from the 1st Bearing-Witness-Pilgrimage to Lampedusa, in September 2014, a month before the memorial-day of the terrible boat accident very close to the coast of the island. Approximately 350 people, including babies and children, had drowned at dawn on Oct. 3, 2013. A fisherman who happened to be out at sea saved dozens with two friends. We should later meet him and talk to him. Mayor Sra. Guisi Nicolini, upon her appointment as Mayor of Lampedusa, gave a moving speech in which those fleeing across the sea took a central role. (The speech will soon be available for download here). When we were in the cemetery to do walking meditation or to sit quietly and pray, contemplating the epitaphs, after a while one could well understand how sincere efforts Lampedusans had been making at the beginning – whenever one dates the beginning – to document who had perished at what age where in the sea. Very touching documents of sympathy and, so to speak, of a reverse hospitality were here – and certainly still are – on the tombstones. But of course this would come to an end, the island is small, the cemetery too. There were graves with multiple names, down to a tiny and dusty field and a wooden cross. If this wooden cross could speak….

You, dear readers, can already guess how puzzle piece piled up on puzzle piece, how my question where the coffins would actually be taken remained unanswered, how I was moved by the shocking statements of young refugee men in Bonn, who reported, again and again, that mothers, aunts, mostly in the night, called and asked for their sons! If they even learned whether their child was still alive or now knew for sure that he or she had died – they desperately wanted to know where this beloved, missing person, their child, was buried! The Syrian people I met, with some of them friendship connected or connects me, were exhausted by these phone calls or other calls, also the few beautiful occasions exhausted them (birthday parties, weddings), because they could not be there.

In January 2020, after many conversations with open, helpful (except one, in a bar in Reggio) Italians, I realized that these questions – although we always affirmed our gratitude and listed what burdens the Italians, and particularly the Southern Italians, Sicilians would carry for us, those from the “rich” North of Europe – that these questions to ask were a taboo.

Only on the penultimate day of our pilgrimage would puzzle pieces of what we had experienced or observed come together in a meaningful way. By then we had been to numerous cemeteries and had looked around. One of the cemetery employees knew something to tell me.
A young employee in the bar at the hotel near Tarsia expressed a fantasy. And last but not least, the enlightening conversations around the old and newly planned cemetery in Tarsia: all this plus an article in the magazine SPIEGEL, which suddenly landed on my cell phone and which I read out in the rented car, gave clear clues to the unspeakable: There were mass graves. Very likely mass burnings. And there were over twenty cemeteries in Sicily whose names we could have gotten on Monday, the day we left for Germany. Their purpose was to hold a certain percentage of dead refugee bodies. Whereby at that point it was already clear where they would be buried: Behind the beautiful tombs in Italy that look like tiny houses, and also still behind the line of beggars and poor people.

I firmly believe in community mourning rituals. You have to have experienced them, even if they were caught up – and I caught up many because there was no mourning in our home -. I believe that they give something to the dead and to their loved ones. That they give something to those who are witnesses; even if they only hear about it, they will be touched. Furthermore, I firmly believe in the power of the relationship with the dead person, which has almost the quality of a person, of an organism. That is, in the act of mourning, in the period of mourning, we allow and give space for this relationship to clarify and purify itself. Perhaps our relationship to God, to the divine, numinous, is also to be (re?) considered. Are we living this life the way it wants to be lived, or even the way it should be lived? Death is a powerful healer that is almost never convenient. It teaches us less about death than about life. What has actually died in us long ago? And what of it can or will I let go and what wants or needs to be revitalized, created?

My compassion for my soul mates, the Italian people, has grown. How good that we can suppress! The flower lady informed us about this at the last cemetery we visited on Sunday, in Reggio Calabria. Or was it in Messina, and we had already crossed the Gulf? Reporters and know-it-alls were getting on her nerves. We gave her our “thank-you-song” with large smiles, and bought some flowers.

The point is, and I think this is clear from the text, which will have sequels, we must not let human beings – I know them best – (certainly not animals either), just die under miserable circumstances. But we do that, and we do it without need. Once one has set out on the path of giving up the fear of certain manifestations of life (the sick, the old, the dying, the dead: the classic themes in Buddhism, and I would add: Poor, marginalized, beggars, strangers), then these encounters lead to deep insights and the desire to want to alleviate suffering, by the way, also in ourselves. Which brings us to the beginning. We alleviate suffering by seeing One Life everywhere. We let ourselves be touched and do what life demands of us. Silent joy will fill us.

Cheesy? Try it out, declare certain days or small journeys as pilgrimage days. Be inventive. If we want to wait for the clergy to offer such things, we can wait a long time. I did not want to wait or become bitter. You can write or call me (+43/228/7443939, m.winkelmann-schreiben@web.de. Donations for Little Temple: PayPal, my address).

“Our eyes were still innocent” (from Davide Enia: Shipwreck at Lampedusa).